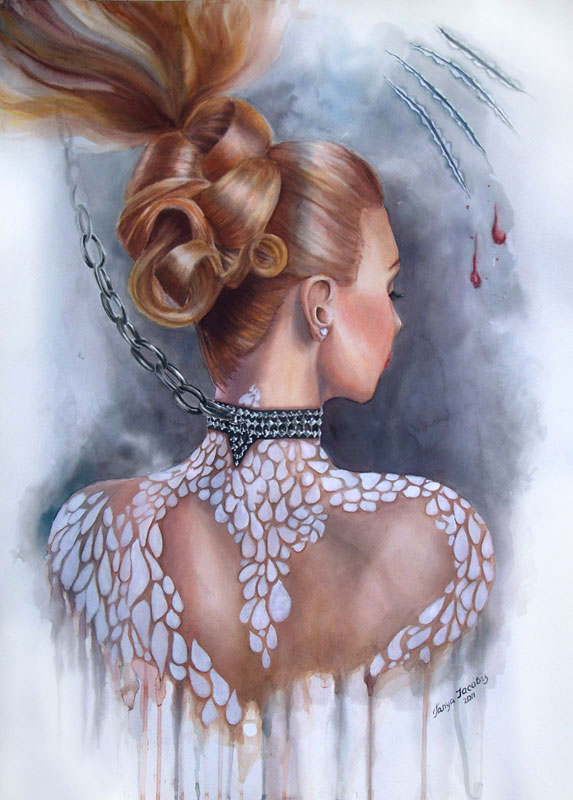 When Madeline entered Greg Ricci’s studio, she found him reclining on the carpet in the same indifferent, relaxed pose she had left him in the morning, the upper body on the floor, legs in an armchair, a cigarette in his mouth with eyes half-closed.

“At least five customers made an order to purchase this painting …very, very respectable persons – a diplomat, a widow of a ship-owner, a restaurateur …” She began.

“Who of them will pay more?” He cut her off in a rather rude manner.

“I can’t wait any longer, Madeline, I have lots of debts,” he shouted, jumping to his feet. “Lenders are simply strangling me, dammit, it’s unbearable,” he poured himself a whiskey and, after a couple of sips, laid flat on the floor again.

She went down to him, kissed him trying to calm him:

“Greg, dear, there is very little time left … be patient!”

He embraced her without uttering a word and there was a long silence, only their thoughts led the dialogue, only their feelings…

What could he tell her? He is Greg Ricci, a free artist, free from everything and from everyone except his own talent and now, Madeleine… She is not like anyone else, not like any of the women whom he had met in his life.

Women, how many were there? As many as his favourite wines, maybe 7, like seven colors of the rainbow, maybe 12, like halftones in a chromatic scale, and maybe 24, like hours in a day …

How different they were – graceful and pompous, small and pretty, provincial silly and secular fashionistas…

But Madeline… she was a MUSE…

What could a Muse tell to the Artist?

The Muse had a husband, a pragmatic cynic who looked at everything with a condescending smile, but when he visited the exhibition with his friends and saw this scandalous picture (recognizing the facial features of his wife in it), he was furious!!! He really wanted to deal with the insolent! He thought that she, Madeleine, belonged to him, to the revered Mr. von Stein!!

He saw in the plot of the picture an evil mockery of him, Friedrich, and how could she, Madeleine, go for it, pose for it, does she really not understand what it is to be his wife, what is to be Madame von Stein?!

Newspapers and media rang out about this scandalous portrait. The president of the Feminist League announced that this PORTRAIT is a manifesto of a modern self-respecting woman and should become the symbol of the Feminist League. And having learned (from the paparazzi) WHO is depicted in the portrait, was going to take an interview with Madeleine!

An enraged husband personally offered Madeleine money, a lot of money and a share in a profitable business in return that she would stop to visit that crazy man, brawler and seducer Greg Ricci…

What could the Muse oppose to the Artist?

The diamond necklace she laid to buy a place at the exhibition?

She posed for him on this plot, invented by her to shock the audience and make those snobby elites

What could he answer her, UNDERSTANDING,

That she, Madeline, she is the only one,

That he has one talent, the talent of a draftsman and painter…

He simply no longer will be painting pastorals, still life, landscapes…

He will paint SCANDAL because they pay for it,

He just … because he had…

What Artist could answer to the Muse?

What could the Muse object to the Artist?

(the story behind the portrait by Eva Yablokova) Portraits in oil and watercolor from the photo. Portraits in oil and watercolor Drop Us a Line

No products in the basket.